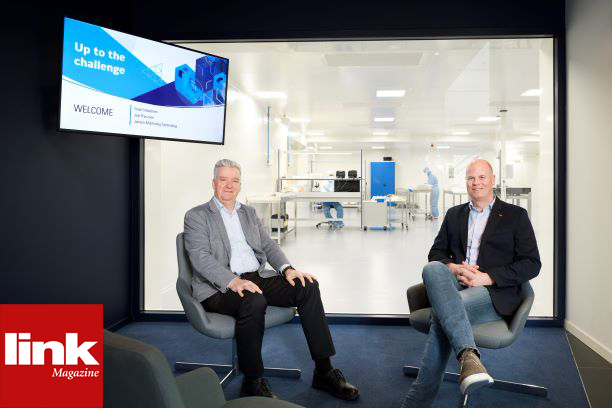 Link magazine: Within the hard boundaries of concrete there is now a custom-made cleanroom

11 May 2021Hugo WoudsmaMedia, Projects
Since ProCleanroom became a manufacturer itself, business is booming for the company in Valkenswaard, just a stone’s throw from Eindhoven. Turnover is growing every year, with what has become a wide range of cleanroom technology. Many orders call for customisation, even when the company is part of a construction team, as during the construction of a 250-m2 high-end cleanroom in the new building of Anvil Industries.

Back in 2005 Niels Ferguson already realised: driven by the demands of their clients, manufacturing companies want to work ever cleaner. So that same year, the owner and managing director of ProCleanroom started working on solutions for low-dust areas. The company became a distributor and quickly started to grow. However, it was not until 2016 that business really took off, according to Ferguson. After all, that was the year he decided to have ProCleanroom develop and manufacture its own flow cabinets and cleanrooms. ‘From distributor and advisory organisation we became a manufacturer. Quite an adjustment. On the other hand, with the necessary knowledge and experience, the foundations were already there. This made for a flying start.’

Even now we’re still growing, according to Ferguson. ‘In 2020, our turnover was over 3 million euros – 20 percent more than the previous year. And despite corona, we are also going for growth this year. The crisis has not affected us much so far. Deliveries were sometimes delayed, but fortunately for us that was all.’

ProCleanroom currently numbers twelve employees and has a flexible shell of about eight engineers. The company develops and designs. Supplies, installs and validates, and relies for the supply of components on an extensive supply chain of suppliers. The fact that most of them come from the local region in the south of the Netherlands is a very conscious choice for Ferguson. ‘Technology and products are excellent here, why should we source them from further afield? Moreover, the literally short distances are convenient, you can quickly visit each other. That’s how you get to know each other – and yes, that’s when sympathy often wins out.’

In addition to the focus on marketing, reference projects in the region are also contributing to ProCleanroom’s rise, according to Ferguson. ‘We mainly supply plastics, metal, electronics and assembly companies. About 70 percent of our work is for high-tech companies, often related to ASML. The client’s process is always the guiding principle, our offering is broad. This ranges from flow cabinets and simple flexible, mobile cleanroom solutions to large, fixed cleanrooms with fully-fledged air treatment. Moreover, with our in-house engineering, we can customise where necessary.’

Customisation was also a requirement of Job Precision and Jansen Machining Technology for their joint new building in Valkenswaard. Both producers belong to the Anvil Industries group of companies and supply a broad market for precision metal parts. With this overlap came the need for one high-quality cleanroom, situated in the middle of the new building and intended for the clean assembly and packaging of products.

The fact that ProCleanroom was awarded the contract was, according to Hans Bakker, managing director at Job Precision, partly down to a strong portfolio. ‘ProCleanroom has the experience and expertise, which it has demonstrated with cleanrooms in the supply chain for ASML. The company also offered us competitive pricing and, not unimportantly, they are based here in Valkenswaard. A local partner with short lines of communication is valuable.’

As the available space in the new building was a given, Anvil wanted to make optimal use of the height and surface area for the cleanroom. ProCleanroom therefore had to literally push the boundaries, which it did with an air return concept with hollow walls, among other things. ‘So air recirculates within the panels, rather than through an exterior system,’ says Ferguson. ‘In addition, the thermal and sound insulation within this applied panel system is maximum, and temperature and humidity are accurately regulated. H14 HEPA end filters help ensure the cleanest possible work environment and, yes, the panel system just looks sleek. It has a completely flat finish – including lighting – and thanks to a special cleansafe coating, it can be cleaned perfectly.’

Asked about challenges during the project, Ferguson thinks back with a smile to the construction of the ultrasonic washer, in the front space of the cleanroom. ‘The ceiling is higher than that of the clean room, which reduces the distance to the concrete above even further. Nevertheless, we have also provided the necessary ceiling height there, with plenums in which the air is blown in such a way that very little space is required.’

The cleanroom was built at the same time as the rest of the project, for which ProCleanroom usually works with the client only. ‘At Anvil, we were a partner of the construction team,’ Ferguson recalls, ‘and at meetings we sat around the table with six or eight other parties. This was special for us, and required detailed coordination with everyone. As far as I’m concerned, we’ve all succeeded in doing that.’

In the new building, which was completed in the autumn of 2020, the cleanroom of around 250 square metres occupies a prominent place. In fact, the glass facade at the main entrance offers the visitor a direct view of the cleanroom, which is classified as ISO Class 6 where ISO Class 7 would have sufficed. ‘It has become a beautiful showpiece,’ says Bakker. ‘It took a lot of communication, but that’s how you arrive at this result together.’ Ferguson also looks back on the project with satisfaction. ‘We’re proud of it. It was challenging, but shows what we are capable of precisely because of that.’

For now focus on Benelux

ProCleanroom has delivered solutions in almost every European country. ‘Yet we don’t focus internationally,’ says director Niels Ferguson. ‘If we were to focus more on foreign countries, then Belgium and Germany would be the more obvious candidates. Moreover, I see plenty of opportunities for the Netherlands. There’s also plenty of fun stuff for us to do closer to home.’

In addition, ProCleanroom has had its own web shop for over a year now, where customers can order accessories and consumables for the design and operation of their cleanroom. Ferguson: ‘The web shop is complementary to our portfolio and underlines the fact that we now stand for fully turnkey products.’